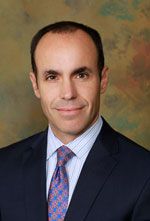 “From the time I started the practice of law in 1997, I have approached each client’s personal injury case with the mindset of leaving no stone unturned. Thorough preparation, tenacious advocacy, and an unwavering commitment to achieving justice and fair compensation for all of my clients have been the keys to my success. I am also proud to be one player on a team of dedicated trial lawyers who have earned a reputation for excellence in the courtroom.”

David J. Martin began his career at MRR as a law clerk in the litigation department, and later became an associate where he quickly gained courtroom experience under the guidance and mentorship provided by Joseph B. Chazen and Paul A. Turkheimer. Early in his career, David was often retained by insurance companies to defend their insureds against claims of personal injury. Through that experience, and numerous jury trials, David learned valuable lessons from the defense of injury claims that have now provided perspective and experience to assist innocent injured victims of motor vehicle accidents, construction accidents, and medical malpractice.

Before the age of 40, David was elected Principal at MRR, and obtained several significant settlements and verdicts for his clients, highlighted by a 6.1 million dollar jury verdict in a wrongful death medical malpractice case.

David’s practice is now devoted exclusively to the representation of individuals and their families who have suffered serious personal injuries and death caused by the negligence of others. David has successfully resolved hundreds of cases and has recovered millions for his clients who have suffered injuries caused by medical errors, construction failures, motor vehicle collisions, dog bites, hazardous conditions, and food poisoning.

In his free time, David enjoys cooking for friends and family, music, and travel. David also enjoys skiing, as well as competing in Olympic distance triathlons and running events.