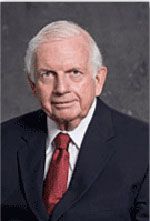 "Since I was very young, I have realized that the law is the glue which binds society together and prevents its descent into anarchy.  Law, however, can only serve this laudable objective if it is directed by citizens with the highest ethical standards and the intelligence and training to discern the ethical path and to follow it without regard to personal gain or power.  Since  the  founding of MR&R in 1975 our guiding policy has been to adhere strictly to the rules of court and  professional conduct and to be fair and  candid in our interactions with clients, and fellow as well as opposing  counsel.  Our motto has always been that being ethical is not just the best policy -- it is the only policy."

Bill Meyers commenced the practice of law in November 1964 as an associate with the law firm of Nylen and Gilmore in Hyattsville, Maryland, where he became a partner in 1968.  In 1975, he founded what is now the law firm of Meyers, Rodbell & Rosenbaum, PA located in Riverdale Park, Maryland.  He served as Managing Principal for 40 years until December 31, 2014. Bill and his wife, Karen, have four children and six grandchildren, all of whom reside in Maryland.  Their youngest child, Evan, is also a principal at Meyers, Rodbell & Rosenbaum.